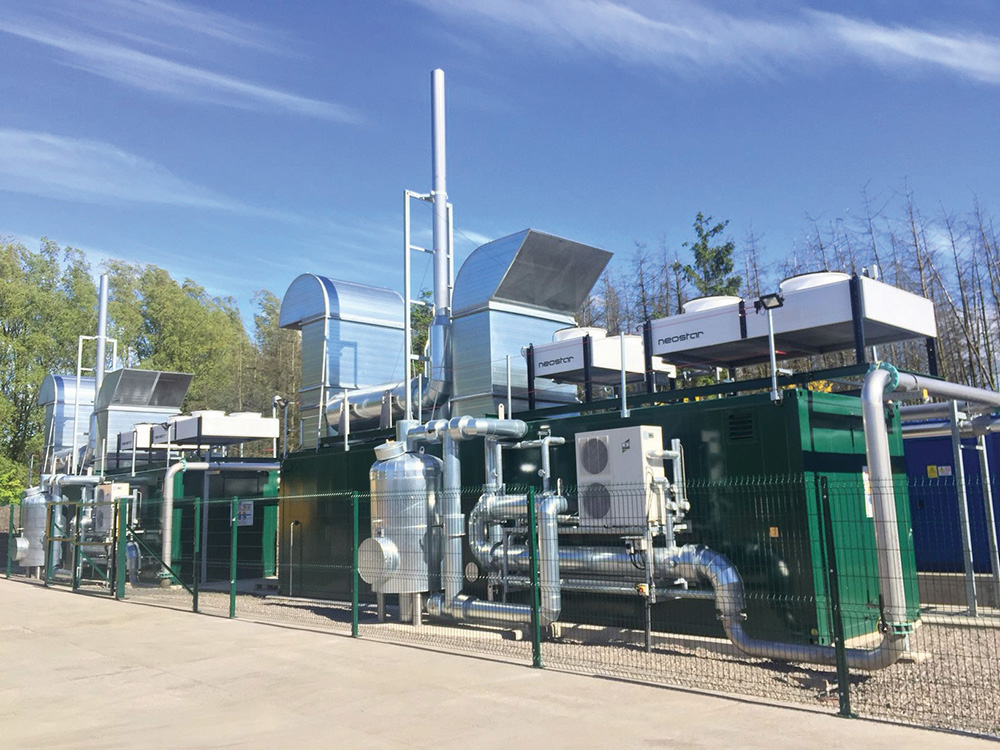 As environmental and recycling targets become ever more stringent, local authorities and businesses are looking for viable, competitively priced solutions to managing waste and reducing its environmental impact.

That’s why 2G, a leading manufacturer of CHP plants, were hired by Scottish Water Horizons to upgrade their state-of-the-art anaerobic digestion (AD) facility at its Deerdykes Development Centre near Cumbernauld, north of Glasgow. This fully enclosed, modern facility has been operating since 2010 and can handle up to 30,000 tonnes of food waste each year from a wide variety of sources, ranging from food producers and supermarkets to the catering industry and local authorities.

With AD technology, biodegradable material is broken down by micro-organisms in the absence of oxygen. AD is currently being widely used to treat waste water and can also be used to treat other organic wastes, including food waste, manure, sewage sludge and biofuel crops

At Deerdykes, the AD process breaks down food waste to produce biogas. This is being used as fuel by two Combined Heat and Power (CHP) units, which produce electricity and heat, thus drastically increasing energy generation. The two units, provided by 2G Energy, each produce 550 kW of electrical energy and 543 kW of thermal energy. The electricity is used to power the works on site, with any surplus offered to the national grid. The heat is used in the facility to aid the fermentation process

2G’s two 550 kW CHP units produce 8.6 GWh per annum which is an increase over the previous 6 GWh per annum from the existing CHPs on site, providing Scottish Water Horizons’ potential to increase its contribution to the export capacity of electricity from 1 MW to 2 MW. They have also increased efficiency to 41.2 percent.

The AD process also produces a nutrient rich by-product which can be used as a fertiliser to improve the nutritional content of Scotland’s soil resources and will help to replace the use of inorganic fertiliser, the manufacture of which has a significant environmental impact.

Scottish Water is a publicly owned company, answerable to the Scottish Parliament and the people of Scotland. It provides around 1.34 billion litres of drinking water and treats 847 million litres of waste water each day. Scottish Water Horizons is a wholly owned commercial subsidiary of the utility, maximising the use of Scottish Water assets for the benefit of customers and the environment. As well as recycling food waste, the company operates in various other sectors such as the developer industry, research and innovation and low-carbon energy. The Deerdykes AD facility provides an environmentally-friendly solution for the company’s clients whilst generating a renewable source of power from a waste product and reducing energy costs for Scottish Water and a triple win.

“One of the key objectives of this project is to enhance Scottish Water Horizons’ reputation”, says Robert Coyle, Project Manager for the CHP engine project. “It also helps us to improve efficiency, contribute to renewable energy targets, protect the environment and keep costs low for customers. The new CHP engines will help us to increase our contribution of electricity to the national grid and deliver low carbon, environmentally friendly systems, which can benefit the wider community across Scotland.”

“We engaged 2G Energy to provide us with a turnkey solution from design to installation of the two new CHP units. This worked really well, we had both mechanical & electrical works included in the one package, of which the programme of works was 16 weeks long, allowing us to meet our short notice heat on date.”