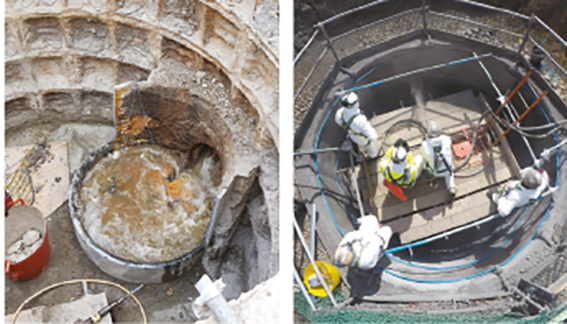 In this issue of Water Industry Journal, Julian Britton, Trenchless Technology Manager at Wessex Water (YTL Engineering and Construction) takes us through a landmark project to renovate Bournemouth CIS Tunnel which is soon to reach completion

The project represents a £1 million investment in structural repairs and the refurbishment of 200m of the tunnel and a shaft, which have suffered from biogenic corrosion. This scheme is located in the east of Bournemouth, some 300m from the coast line.

The Coastal Interceptor Sewer (CIS) is a 1.8 metre internal diameter tunnel constructed in compressed air from 1964 -1971 (Fig 1), with a primary bolted lining and a secondary cast in situ lining for hydraulic conductivity. The tunnel is 8 Km in length and a recent survey of the tunnel identified a noticeable change in the structural capabilities of the lining at the extremes of the eastern leg, close to shaft 13.

The tunnel serves a cumulative population of 34,500 and receives a maximum flow rate of 650 l/s from two rising mains. It is evident that the Iford rising main is long, and has a reduced number of starts, resulting in the sewage resting quiescent for long periods. Consequently, anaerobic conditions allow the formation of hydrogen sulphide (H2S), which forms sulphuric acid (H2SO4) via conversion associated with bacteria feeding upon the nutrients readily available. This, in turn, corrodes the concrete, a ubiquitous process observed across the world.

A petrographical analysis was undertaken by ACS Testing and Sandbergs Consulting Engineers on our behalf, of cores taken through the tunnel lining. The tests were carried out in accordance with APG SR2 (2010) and ASTM C856-14, and samples were prepared from the internal surface of the tunnel lining through to variable depths where concrete conversion was expected. Longitudinal fluorescent resin impregnated thin sections were taken and inspected by a Zeiss petrographical photomicroscope to identify the distribution of porosity and evident micro cracking.

The concrete was identified with aspects of sulphate resisting Portland cement (SRPC). Moisture had penetrated the total depth of the secondary lining leading to general recrystallization of cement hydrates and leaching of Portlandite, with secondary Ettringite.

Having computed this information with the UCS strength of the concrete and visual evidence of cavities in the lining, the tunnel was analysed over its length to establish the residual longevity under the existing geostatic and hydrostatic loading. Over the 1900m of tunnel on the eastern leg under consideration, the 200m chainage downstream of shaft 13 was identified for lining, as it had a residual lifespan of 5-15 years. The lining at the interface with shaft 13 had a calculated lifespan of just 2 years.

In addition, shaft 13 had suffered degradation due to the H2S attack; the constant aerosol atmosphere measured levels of H2S at peaks of 340 ppm, and required scabbling back and repair.

GRP lining of the tunnel

Works commenced to allow entry into the 200m of tunnel downstream of shaft 13, with a ‘Million Point Cloud’ survey of the tunnel and a terrestrial survey above ground, to form a three dimensional model. The flows from the two rising mains were diverted as planned to a new temporary shaft located next to the CIS downstream of the proposed lining terminus, through which the flows could be discharged, via a short connection.

The set out of the shaft was successful and the extrados of the shaft lining landed 12 metres below ground level, with a 50mm clearance to the springing level extrados of the original CIS primary lining. The shaft was underpinned during excavation in a very firm dense, dry Branksome sand geology with SPT’s of >50 N value at depth. The connection was completed through to the tunnel, by core drilling and the over pumping commissioned.

The GRP linings were designed to German standard DWA A143-2 (ATV M127) and the procurement tendered along with the main contract, awarded to Matt Durbin Associates Ltd, and linings supplied by Amiblu of Poland (Fig 2). The liners constituted 1600 mm internal diameter GRP ‘one piece’ circular segments with in-wall joints.

The design of lining, in this case, was undertaken by Dr Dec Downey of Trenchless Opportunities Ltd with assistance from Dr Bernard Falter. In the German design code, three host pipe states are differentiated, and the CIS fell within the most severe ‘State III’, for cracked pipes with larger deformations.

We calculated the hydrostatic and geostatic loadings establishing the wall thickness, against a GRP long term E modulus of 10,000 N/mm2. Falter has written of the ‘Fully Deteriorated’ comparisons with the American ASTM F1216 in his paper to the ISTT at Toronto, Canada in March 2009. We fully intend to build on our experience of liner design by instigating comparative designs in future, utilising the alternative French ASTEE concepts, for non-circular linings.

Some sections of the tunnel required immediate rebar support prior to lining (Fig.3). The 42mm thick, segments were imported from Gdansk, Poland, and were installed over a two-week period. The 450 Kg lining segments were winched home to close joints, and the annulus between the original secondary lining and GRP segments filled, in isolated bays of 20m length, with Pozament SPP3 in 3 lifts, using a cumulative 70 tonnes of mixed grout.

It is well established that the H2S is primarily released due to the turbulence of the flows, as they cascade into structures or pipes etc., and the original designers had constructed a rudimentary drop pipe, transferring flows from 10 metres above, down into the tunnel. This time hydrated concrete monolith was broken out by a 15 tonne long reach excavator from the surface, and the shaft was once again scabbled back to a firm concrete surface, represented by the original bolted rings. (Fig 3)

The Wessex Water Rehabilitation Team, who were appointed to design and manage this contract, had been undertaking due diligence on Calcium Aluminate Cement (CAC), and its ability to resist high levels of sulphuric acid, over the preceding two-year period, liaising with the main proponents of the material worldwide, Sydney Water. We introduced this new innovative use of CAC to protect concrete structures and commissioned Dr Ian Bateman, from Australia to independently verify the efficacy of CAC.

Bateman assisted in identifying the benefits of CAC to gain accreditation for use of the material across the business. Highlighting the non-structural corrosion resistance benefits, Bateman points out the corrosion process:

‘Stage 1 begins with a newly created concrete structure, which contains calcium hydroxide enjoying a highly alkaline environment pH of 12 to 13. These conditions are not suited to bacterial activity and consequently corrosion is minimal. Acidic gases such as CO2 and H2S present in the sewer atmosphere, which can dissolve into moisture present in or on the shaft wall and subsequently react with the alkali species lowering the surface pH towards more neutral levels’.

In explaining the protective characteristics of CAC, Batemen continues, ‘it contains no calcium hydroxide, instead it contains calico alumina compounds ( C3AH6), which when exposed to sulphuric acid reacts to form Aluminium hydroxide Al(OH)3, stable in H2SO4 down to pH 3.5. Effectively this forms a barrier to further corrosion. Al(OH)3 layer dissolves and reacts to form Al2(SO4)3 which becomes sacrificial, but at a very slow rate.

Therefore, shaft 13 was scabbled back to the substrate, shotcreted by a make-up layer of SRPC concrete, and over-coated by a 40mm veneer of CAC for protection. (Fig 5)

The original concept of vortex energy dissipation drop pipes was invented in the 1950’s by the predecessors of Wessex Water, to transfer storm flows from a height of 90m, down from the Clifton catchment in Bristol, into the new NSWI tunnel. The concept of inducing an air core to break the velocity and pressure of water, was conceived to prevent cavitation and quiesce the flow. The concept was adopted in Chicago in the 1970’s on the TARP tunnels, where a number were installed.

We took the opportunity of installing a new drop pipe in the shaft and all of these measures should continue to offer mitigation of chemical dosing of the rising mains with sodium nitrate, avoidance of such being a more cost-effective renovation and operational intervention.

This £1 million investment, which employs both tried and tested techniques alongside more innovative techniques and materials, will enable the Bournemouth CIS Tunnel to work efficiently and effectively, serving the local community for a long time to come. 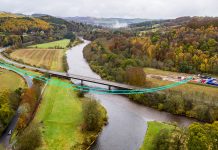