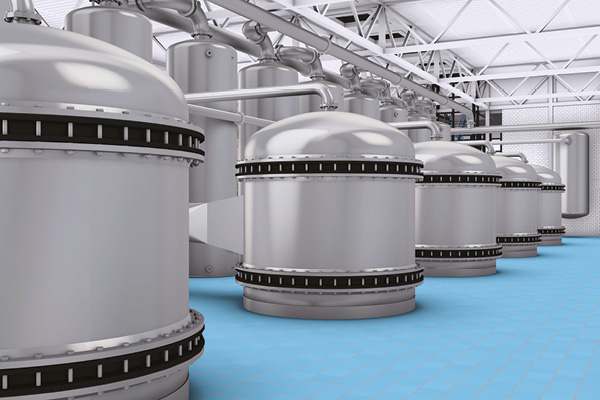 Today, a quarter of a million people in the Plymouth area are drinking water produced by a new, state-of-the-art treatment works.

South West Water’s Mayflower Water Treatment Works at Roborough, just north of Plymouth, is the first of its kind in the world.

It uses cutting-edge treatment processes, designed to produce impeccable drinking water and to be more sustainable than a traditional water treatment works.

Mayflower fully took over from the old treatment works at Crownhill in Plymouth, which has been serving the city since the 1950s, at the end of 2020.

The innovative treatment processes at Mayflower were designed and developed by Dutch water technology company PWNT, and tested at a prototype facility at Crownhill from June 2013 until June 2015.

Suspended ion exchange, inline coagulation and ceramic membrane microfiltration are used to produce more water, more efficiently and at a lower cost than traditional technology. It is the first time that these combined technologies have been used to produce high quality drinking water anywhere in the world.

Mayflower has been producing treated water since August, which has been blended with water from Crownhill to ensure a smooth transition for customers. The proportion of Mayflower water going into public supply was gradually increased over a period of several months until finally Crownhill was officially retired.

Now, 100% of Plymouth’s drinking water is supplied by Mayflower.

On the day the new treatment plant took over, South West Water’s director of operations for drinking water services, James King, said: “It has been years in the making – planning, building and commissioning – but today is a truly significant milestone for South West Water, our customers and the wider water industry.

“We already produce some of the highest quality drinking water in the UK, but Mayflower does so extremely consistently and efficiently.

“Mayflower will meet the needs of Plymouth’s growing population and provide a secure, high-quality drinking water supply for the wider Plymouth area for generations to come.”