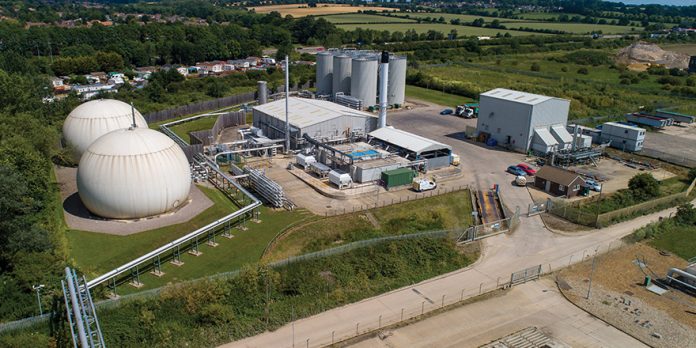 David Hartley explains how Anglian Water is generating enough energy from its combined heat and power (CHP) plants to run a town the size of Lowestoft for a year.

Last year was a record year for combined heat and power (CHP) in the world of Anglian Water – England’s largest water company by geographical area.

The supplier of water to nearly five million customers in the East of England celebrated its highest ever yield of energy from poo power to date, producing 107,515MWhs of electricity. Not only would this be enough to send Marty McFly Back to the Future nearly 80 times, it is also enough to supply 27,000 properties with power for an entire YEAR.

So far, 2019 has seen Anglian’s 10 CHP plants achieve their most productive six months yet, with the highest ever monthly yield of 10.4GWh reached in April.

The record-breaking year for the water company meant that the power generated in 2018/19 avoided emissions of more than 32,700 tonnes of Carbon Dioxide (CO2) – the equivalent of taking 10,000 cars off the road.

The production of electricity also created a cost benefit of £8.79million by allowing the company to offset the energy used to power its onsite operations. The use of renewables provided Anglian with the opportunity to sell the excess electricity produced to local networks, with enough surplus energy to power 7,200 homes for a year.

The company has been using the technology since 2008, but in 2014 there was a step change when Anglian Water set up a dedicated team to take over from contractors and started running the operation and maintenance of the plants in-house.

Graham Powell, CHP Manager, said: “We’re producing more energy from the same amount of sludge because our teams are taking ownership of the CHP plants and keeping on top of maintenance.

“We’re working collaboratively to carry out maintenance work on CHP engines at the same time as work is done on the Sludge Treatment Centre, so we have less downtime, and we divert sludge to other plants during maintenance to make sure it isn’t wasted.

“Projects like this are helping to reduce our reliance on traditional energy sources, something we believe a 21st century water company should be doing more of, and it’s something our customers told us they want to see too.”

But…how does it work?

CHP – or Poo Power as it is sometimes affectionately known – is the process of creating power from the treatment of sewage sludge, a by-product of the water recycling process.

The sludge is treated in specialised vessels – a process known as anaerobic digestion – to high temperatures to kill off harmful bacteria, meaning what’s left behind can then be used as a soil conditioner in agriculture.

“The figures are the result of a greater focus on the performance and maintenance of the end-to-end process from sludge treatment to energy generation, collaborative working and improvements in sludge management,” Graham continued.

Through changing the way water recycling centres are managed, with dedicated teams of technicians to monitor and enhance performance, the company has been able to achieve a threefold increase in the amount of energy produced over the last five years.

Since forming the in-house team, Anglian have helped to set up a water-industry specific “CHP User Group” as a forum for collaboration and shared learning. This has already produced benefits with more efficient trouble shooting and developing methods of best practice within the specialist environment.

“This change provides a sound platform to drive innovation by bringing together key subject matter experts with a clear focus on a common goal. It’s vital that the end-to-end process is maintained just like a production line. Reliability of the sludge treatment process is vital to the CHP engines, as without the correct sludge feed there won’t be sufficient gas of the right quality to run the engines,” Graham added.

How electricity is generated from sludge

1 Sludge cake is weighed as it comes onto site

2 It is then delivered to the sludge cake building

5 Sludge is then pumped off site to anaerobic digestion plant

7 Biogas is stored in bags

8 The biogas is used to power four CHP engines, which generate electricity

Peter Joyce, Head of Sludge Treatment, said: “The real catalyst for the change in performance has been the sheer energy and focus put in by the newly formed teams. This is creating new opportunities as the integrated team talk on a daily basis.

“As we’re settling into the new structures, it’s important that we continue to work at the highest level of safety and expand learning, so we have as many people skilled in both treatment processes and sludge treatment as possible. We’ll also be reaching out to other teams within Anglian Water, our alliances and suppliers to help us reach an industry leading position.”

Over the past 10 years, Anglian Water has invested £230million to enhance the treatment process at 10 of the region’s largest water recycling centres and enable them to produce renewable energy in this way.

The use of CHP at Anglian isn’t the only carbon-reducing change in the business. The company’s broader renewable energy strategy focuses on minimising the ‘operational’ carbon from its everyday operations, and the ‘capital’ carbon used in building assets such as water mains, sewers and pumping stations.

Anglian Water is one of the founding members of The Prince of Wales’ Corporate Leaders Group, a collective whose members are committed to addressing their climate impact and ensuring resilience to the ever-increasing effects of climate change.

Furthermore, Anglian’s involvement in the industry-wide ‘Public Interest Commitment’ commits Anglian to continuing to deliver wider benefits to society and the environment above and beyond the provision of clean, fresh drinking water and water recycling services. As part of this commitment, a goal for the whole sector is to achieve net zero carbon emissions by 2030.

In order to ensure that the business is operating in the most carbon-savvy way, Anglian have been exploring the use of innovative battery storage, solar power and electric vehicles across the business.

Further to this, two years ago, Anglian Water set the benchmark of becoming the first utility to issue a Sterling Green Bond meaning all of the company’s capital investment programme meets the Green Bond Principles of sustainability, environmental performance and carbon reduction.

The success of its CHP programme is an important step in meeting its carbon targets, realising that there really is power in poo.