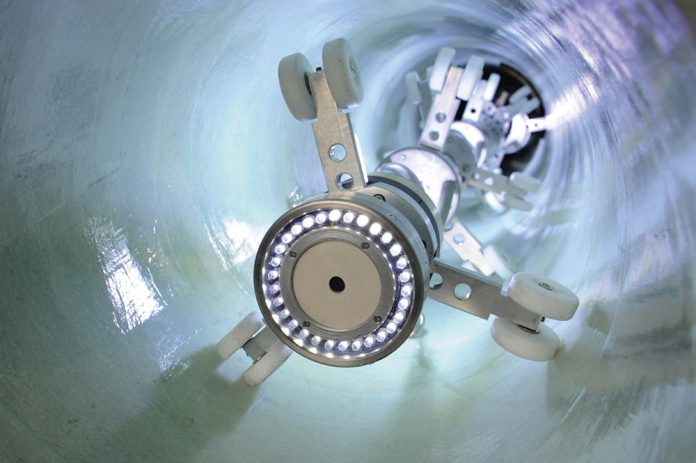 Concern about the state of the United Kingdom’s underground pipe networks emerged in the 1970s with the reorganisation of the Water Industry and the publication of the NWC’s National Assessment’ in 1977.

It became clear that a substantial proportion of the UKs 234,278 km of sewers and 318,415 km of water mains were more than 50 years of age and in need of attention. Annual renewal costs for sewer and water mains estimated at £215.3M sent shock waves through government and ultimately triggered discussions leading to privatisation. NWC urged accurate determination of the scale of problems underground and development of new methods for repair and maintenance prompting investment in CCTV inspection and rehabilitation techniques.

Thames Water’s Graham Cox, at the 1981 ICE Conference ‘Restoration of the Sewerage Systems’, spoke of ‘making use of the hole’ describing new techniques for sewer renovation including slip lining, cured in place lining and GRP panel lining.

In 1985 the institution of Public Health Engineers, now CIWEM, hosted ‘Trenchless Construction for Utilities’. The event, styled ‘No Dig 85’, attracted 378 delegates from 21 countries and 66 exhibitors, was a signal moment for pipeline rehabilitation. Speaker James Thompson of Jason Consultants detailed the scale of opportunities for renovation and renewal in the UK and overseas. He introduced the notion that the costs of the social and economic disruption associated with open cut construction would be many times the direct engineering cost of renewal and replacement and should drive innovation towards more and better trenchless methods. No Dig 85 prompted establishment of an International Society for Trenchless Technology, a series of annual awards for trenchless innovation, various trenchless publications and a succession of international No Dig conferences; the 38th International No Dig will be held in Helsinki in October 2022. There are now 27 affiliated national or regional trenchless societies affiliated to ISTT, providing representation for more than 3000 corporate and individual members. Pipeline condition assessment and rehabilitation are the primary focus for at least half of the current membership.

Cured in place pipe, originally pioneered in the UK in 1971 by Eric Wood, developer of the Insituform method, is unquestionably the primary process for renovating sewer pipe. Wood’s company and its contracting partners have subsequently lined more than 65,000kms of gravity sewer. The annual worldwide investment in cured in place pipe in all its forms is thought to be running close to £2Billion, about 55% of expenditure on pipe renovation. The method continues to evolve with UV light curing of glass reinforced linings pushing boundaries and growing in popularity. Other methods such as close fit lining, spiral wound lining, slip-lining with PE and PVC pipe and lining with GRP panels and segments account make up the balance, altogether perhaps half of the rehabilitation market.

We should recognise that rehabilitation is a catch-all phrase, defined by WRc, for repair, renovation and replacement. Use of trenchless methods for installation of new or replacement pipe is also well established. In 2001 the United Nations Environment Programme declared renovation and trenchless installation to be environmentally sustainable. Since that time numerous academic studies have calculated that greenhouse gas emissions are substantially reduced wherever trenchless methods are preferred to open cut construction. GHG’s for trenchless technologies can be as low as 10% of those estimated for open cut. UK Legislation such as the New Roads and Street Works and the Traffic Management Act has been crafted to regulate the disruption caused by street-works. These provisions generally support the use of trenchless technologies and benefit urban dwellers wherever underground utilities need attention. In many cities around the world regulations favour trenchless methodologies for the public benefit by restricting utility works to night working and limiting on-street storage of materials and construction traffic movements.

There remain barriers to wholesale adoption of trenchless technologies. Such methods can be more costly when considered solely in terms of direct costs. They often require specialist materials and skills. The trenchless industry has much work to do promoting awareness of its benefits and providing in service training to engineers and managers. No Dig Live, to be held at the Peterborough Arena, September 14-16th includes a 1st European No Dig Conference on Pipe Rehabilitation and related short courses. The technologies must be regulated with detailed specifications and quality management systems which recognise that a manufacturing process is being undertaken at the worksite. Adequate provision must be made for continuity of consumer services such as maintaining water supply during preparation and timely completion of siteworks including essential quality assessment.

It could be said that over the past 50 years the industry has harvested some of the low hanging fruit, gravity sewer renovation is undoubtedly simpler than similar works on pressurised water or sewer mains. However there remains much to do in gravity and pressurised mains network, our buried pipelines have grown in length from 550,000 to 700,000 km over this period, many are aged, the process of wear and tear is relentless. More than half of our pipes are pressurised and inevitably more challenging. The condition assessment and rehabilitation procedures are more complex; but dig up and replace, with the attendant impact on the environment and the economy, should not be the go-to solution. We must explore better ways to solve the challenges and speedily install high strength linings without impact on water quality or loss of hydraulic capacity.

In the United States, the Environmental Protection Agency’s (EPA’s) sixth national assessment of public water system infrastructure needs shows a total 20-year capital improvement need of $472.6 billion for water systems to continue to provide safe drinking water to the public. The picture must be very similar in Europe. This is the real challenge to materials suppliers, process developers and contractors worldwide, some of whom are now submitting products and processes to regulators and utility owners for trial and approval. We live in interesting times and maintaining our water and sewerage infrastructure is a priority. In the 1970’s we often used to say “out of sight and out of mind”, but 50 years on environmental awareness is more acute and there are no excuses for kicking the problem into the long grass, the future is trenchless.

Dec Downey is a Chartered Engineer, he graduated from the University of Bath in 1970 and obtained his PhD in Materials Science in 1975. He spent fifteen years working in the concrete pipe industry before joining Insituform Technologies in 1987. Since 2002 he has worked as an independent consultant specialising in pipeline rehabilitation providing services to water and sewerage undertakings and their contractors in many countries around the world. He has been involved with the International Society for Trenchless Technology since its formation in 1986, he served as ISTT Chairman in 2007-2010, a Trustee since 2002 and is presently Honorary President. Together with Prof Sam Ariaratnam, Dr Downey developed the successful ISTT Masterclass Programme, teaching a variety of courses on trenchless technologies around the world. He is a co-author of the NASTT’s Cured in Place Pipe (CIPP) Good Practices Guidelines. His efforts have been recognised with the Japan Microtunnelling Association’s Kurose Award, the UKSTT’s Lifetime Achievement Award and the ISTT Gold Medal. He is an ISTT Fellow.