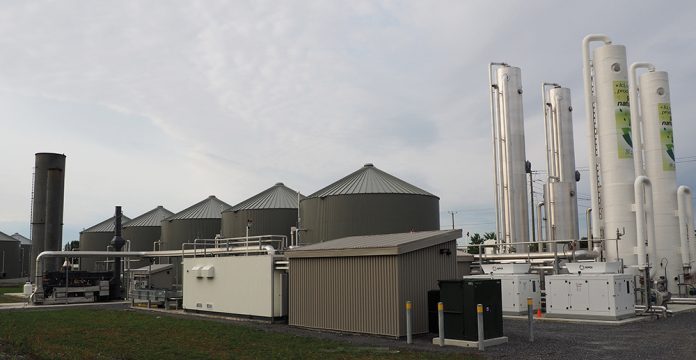 In 2009, Canada’s Province of Quebec announced its intention to ban organic waste from landfills, prompting the City of Saint-Hyacinthe, located east of Montreal, to look for new ways to treat its municipal waste. Ten years later, Saint-Hyacinthe is converting 25,000 tonnes of organic waste—100 per cent of what is produced annually by the city, local agri-food businesses, and 23 surrounding municipalities in the region—into revenue-generating renewable natural gas.

Saint-Hyacinthe began treating its wastewater sludge with biomethanisation in 2010. A year later, the city started looking for better ways to utilize its raw biogas.

Greenlane Renewables Inc. is a leading global provider of biogas upgrading systems which cleanse impurities and remove the carbon dioxide from biogas to produce high purity biomethane, also known as renewable natural gas (RNG). This RNG can be used to decarbonize the natural gas grid and also for direct use as clean, low-carbon vehicle fuel.

Aware that the City of Saint-Hyacinthe was exploring its biogas options, Greenlane connected with city officials in 2011 to introduce the idea of converting raw biogas into RNG. Soon, the two organizations began collaborating on a large-scale upgrade to the city’s biomethanisation plant. The upgraded plant commenced operation in 2017.

Greenlane is the only company globally to offer systems solutions utilizing the three main biogas upgrading technologies: water wash, pressure swing absorption, and membrane separation. The company has a strong international footprint with more than 100 biogas upgrading units in operation in 18 countries and counting. Half of the projects are in the wastewater treatment sector, making Greenlane a go-to solution provider for municipalities looking to extract greater value from their waste.

“We hear time and again how much our customers value the ease of dealing with a single supplier who’s willing to work with them to identify the right technical and commercial solutions for their projects,” says Brad Douville, Greenlane’s President and CEO. “We want to make it easy for municipalities and wastewater treatment plants to increase their participation in the fast-growing RNG market.”

Greenlane collaborates closely with its municipal customers on every project to ensure their objectives are met for maximizing value from their biowaste facilities. Greenlane also provides aftercare support for the life of installed equipment.

“We chose Greenlane’s water-wash technology based on their experience and track record,” explains Pierre Mathieu, Conseiller Technique of the Saint-Hyacinthe Wastewater Treatment Plant. “They had municipal experience with their City of Hamilton project; worked on the largest RNG project in Canada in Montreal; and the RNG produced from their systems meets utility requirements.”

The results of Saint-Hyacinthe’s biogas upgrading project speak for themselves. The city has reduced the sewage sludge sent to landfills by almost 50 per cent, resulting in annual cost-savings of CDN$1.5 million and a 15 per cent reduction in carbon dioxide emissions tied to transportation and disposal activities. In addition to converting its municipal vehicle fleet to run on RNG (reducing noise, greenhouse gas, and particulate emissions), Saint-Hyacinthe also uses its RNG to heat and cool municipal buildings at cost savings of approximately CDN$500,000 annually. Any surplus RNG is sold to regional utility, Gas Métro, for profit. City residents and neighbours in the surrounding region are seeing lower taxes, improved services, and the launch of several regional development initiatives, as a result.

Consumer demand for low-carbon renewable fuels is driving the transition of RNG from a niche to mainstream substitute for natural gas. The Saint-Hyacinthe project illustrates clearly how municipalities can participate in this profitable and rapidly growing market. Converting endlessly renewable organic waste into RNG creates a valuable strategic, sustainable asset for any municipality, improving their environmental impact, green credentials and, ultimately, their bottom line.