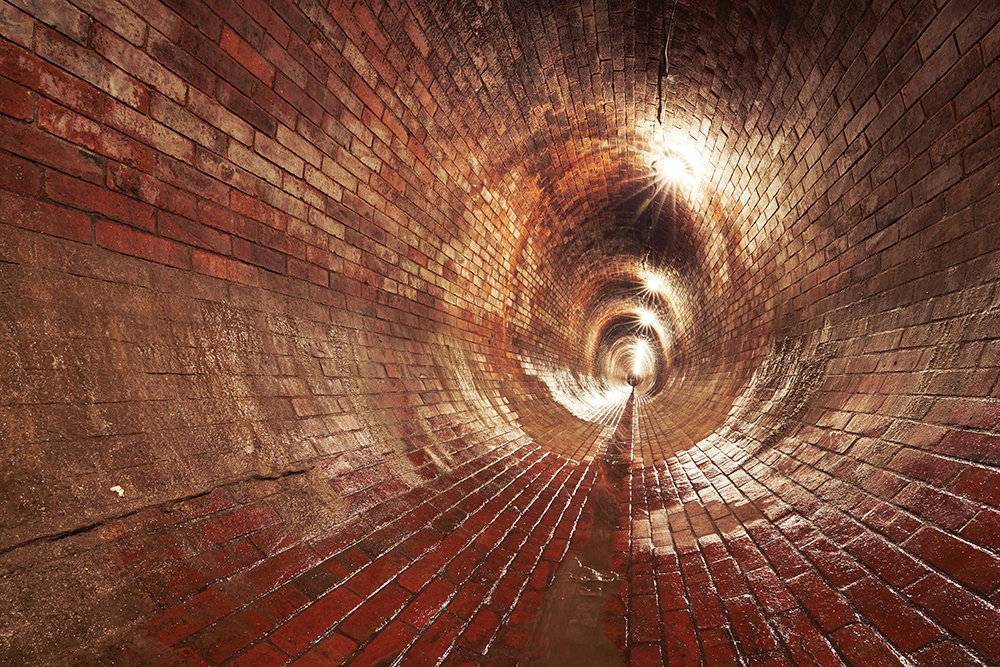 Although some techniques, such as pipe jacking, have been around for many years, trenchless (or No Dig) technologies really started to develop about 30 years ago, largely in response to a need to replace or rehabilitate deteriorated Victorian sewers in cities such as London and Manchester.

At that time cured in place pipe (CIPP) was one of a few emerging techniques that were highlighted in the first No Dig Conference and Exhibition held in London in 1985. Since that time there has been much innovation in the industry and there are now scores of different techniques that can be classified as trenchless, including methods for accurately locating and mapping existing pipes, cables, and underground obstacles, inspection and condition assessment of pipes, leak detection, lining and repair of defective pipes, and the installation of new pipes and cables without digging trenches in our streets.

The application of these methods can significantly lessen traffic disruption and many of the environmental problems that normally accompany open trench work. The adoption of trenchless systems reduces the dust, noise, and the amount of imported fill required for reinstatement; and their smaller site footprint reduces traffic disruption. Trenchless methods often make use of the existing pipe or hole in the ground and do not therefore add to the spaghetti-like congestion of pipes and cables so often found beneath our city streets. Many trenchless methods also deliver faster output rates than conventional open cut and can reduce the overall cost of the work, thus saving money for the utility companies as well as reducing the frustration of the general public.

One of the most widely used techniques for relining pipes is CIPP which in its original form was a resin impregnated felt tube which could be inserted into a defective sewer and then heated with hot water to cure the resin, leaving a new pipe inside the old one. Since the early days of CIPP there have been many developments in resin formulation, the material used for the tube, methods of inserting the tube into the old pipe, and innovative forms of curing the resin. Curing with ultra violet light is one such innovation. This greatly reduces the cure time, allowing the work to be completed faster and further reducing the disruption to both the surface traffic and the flow in the pipe. Similar developments have taken place with PE lining systems which can be inserted into old pipes to form a tight fit thus minimising the reduction in cross sectional area.

The Horizontal Directional Drilling (HDD) technique was first used for drilling oil wells around 80 years ago but it was not until the mid 1980s that the first HDD rigs specifically for the trenchless installation of pipes and cables for the utility companies appeared. Now HDD is a common tool in the armoury of trenchless methods, and pipes and cables of up to a metre in diameter are routinely installed over distances of up to 2km or more, making it perfectly feasible to install water/gas mains and cables under obstacles such as rivers, estuaries, and railways without disruption.

Probably the fastest growing areas of innovation in the trenchless world today are developments in underground surveying and condition assessment of underground assets. Back in 1985, the electromagnetic Cable Avoidance Tool (CAT) was the only method available for locating underground pipes and cables, but this was not able to detect non-metallic pipes. Since that time Ground Penetrating Radar (GPR) has been developed as a technique for locating and mapping pipes of all materials as well as other underground assets and obstructions. Although this has been a much needed and welcome addition to the techniques available for locating and mapping underground infrastructure it requires an operator to push the GPR detector over the assets to be detected and is hence a fairly slow operation. However, developments in GPR sensors and the computerised analysis of GPR signals, combined with the latest global positioning systems, have led to a vehicle towed mobile GPR coming on to the market. This system can survey and accurately map the underground assets beneath up to 50 km of road per day. By combining accurate mapping of the underground with Building Information Modelling (BIM), topographical digital maps, and photographs, it is now possible to store all this data on a tablet computer, take it on to site and literally ‘see’ what assets are underground beneath your feet.

Although there have been many technological developments, and the benefits of trenchless methods are multiple and obvious, there is still a lack of awareness of them and more use could be made of them. The UK Society for Trenchless Technology (UKSTT) aims to promote the use of trenchless technology for the benefit of the general public and does not underestimate the need to improve and update industry’s knowledge of current system developments and capabilities. To achieve maximum exposure of these systems, materials and techniques to the widest possible audience the UKSTT organises lectures on trenchless methods for university students and technical events for members and Patrons. The Society also organises road shows at venues throughout Britain and a biennial ‘No Dig Live’ exhibition. In addition, a series of CPD events – MasterClasses – are regularly held and presentations can also be found on line at the organisations YouTube channel.

One impediment to the greater adoption of trenchless methods is lack of accredited training that inhibits client confidence in specifying their usage. Although training does exist it remains undervalued and underutilised. UKSTT is therefore involved in assisting and encouraging companies able to organise and running suitable trenchless technology training programmes. The UKSTT’s Awards Dinner will take place in Bristol on the 19th September. Details of this and other UKSTT initiatives can be obtained from
www.ukstt.org.uk or the secretary, Lynn MacLachlan at admin@ukstt.org.uk.