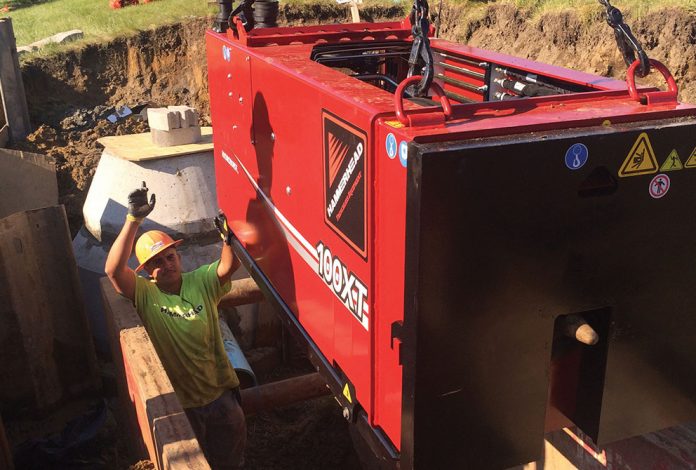 Ten years ago, the demand for trenchless pipe bursting to replace Britain’s gas and water infrastructure was surging “full bore,” so to speak. Some of the pipe bursting work was conducted on large diameter, low-pressure pipe for manufactured gas, as well as sewer lines. Many contractors were racing to keep up with water company pipe replacement initiatives generated by the asset management plan (AMP) period of that time.

Water provision was privatized in England and Wales in 1989. The AMP is in large part based on a five-year review conducted by the Water Services Regulation Authority, assessing each company’s customer service, capability, water quality and environmental impact before establishing allowable price increases. Better performance garners the best prices. It also means each AMP period significantly impacts what companies do with their maintenance budgets. At that time, the AMP prioritized broken pipes and leakage concerns.

Russell Fairhurst, Managing Director of Mammoth Equipment Ltd in Cambridgeshire, said the surge in demand for replacement pipe quickly demonstrated the effectiveness of the pipe bursting technique and the reliability and durability of the equipment Mammoth provides its customers. Mammoth is England’s authorized dealer of HammerHead Trenchless product lines. HammerHead is based in Lake Mills, Wisconsin, USA.

“The pipe bursting method quickly became a common, routine technique,” Fairhurst said, adding that the pipe bursting contractors, the technique itself and the equipment Mammoth provided for it were brilliantly effective.

“Modern pipe materials such as HDPE provided an economical and permanent solution. And the equipment itself is so robust that contractors are still using equipment they first purchased over a decade ago.” Those who aren’t have sold theirs to eager buyers and to rental houses, who know that the equipment still has long useful life left in it.

The surge in demand may seem to have peaked and passed. Not so, Fairhurst said: “That’s the nature of market here under the AMP. Infrastructure maintenance is a cyclical thing. It never goes away, even when to align their investments with the AMP, water companies may focus their budgets, say, on water treatment for a period. But it will come back around to replacing pipe.”

The introduction of the AMP period has also tended to cause surges and lulls in water company maintenance investments. Contractors see demand rise for their services during their customer’s mid-cycle spending peaks.

Much of the large-diameter cast iron gas pipe used to deliver gas manufactured from coal has been replaced with smaller diameter, high-pressure natural gas line pipe. The smaller diameter pipe for the upgraded system doesn’t require the existing pipe to be burst. It’s slip-lined into place within it. Yet even with the introduction of additional trenchless techniques, including advances in cured-in-place-pipe lining and materials, the pipe bursting technique continues to have its place.

Most of the current pipe-bursting work Fairhurst sees makes use of pre-chlorinated pipe to replace potable water mains. Run length varies based on which spots along in situ pipe permit placement of machine pits. “A 300 m run might be performed, for instance, as a 150 m pull and then a 50 m run to accommodate an obstacle or a more practical place to tie back into the main.”

The coiled HDPE used to replace the pipe in a typical project comes in 100 m lengths. Therefore, the runs are performed wherever possible as separate 100m long pulls. The most common size of replacement pipe right now is 90mm to 100mm HDPE.

The typical pulling unit Mammoth customers use for bursting shallow-lying, 3-inch to 8-inch (76 mm to 203 mm) cast iron pipe is the HammerHead 100XT or smaller rod-pulling machines like the HB5058. The HB5058 is rated for up to 45 tonnes of static pulling power using lightweight API-style threaded rods designed for use in pipes 2 to 8 inches in diameter.

Although the emphasis of AMP7 (2020–25) is not known yet, the current AMP6 cycle is wrapping up. Conjecture is that the new plan may focus private water companies on environmental improvements.

It’s too soon to know for sure, but that just might mean another rise in demand for trustworthy trenchless strategies, with private water companies giving English and Welsh pipe bursting contractors more work than they can keep up with. As an environmentally friendly and reliable trenchless technique, pipe bursting has already proven itself a winning method throughout Britain. 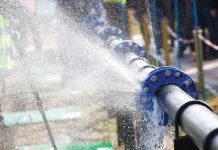 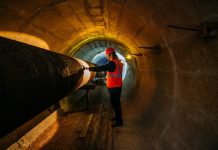 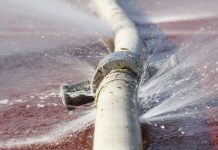