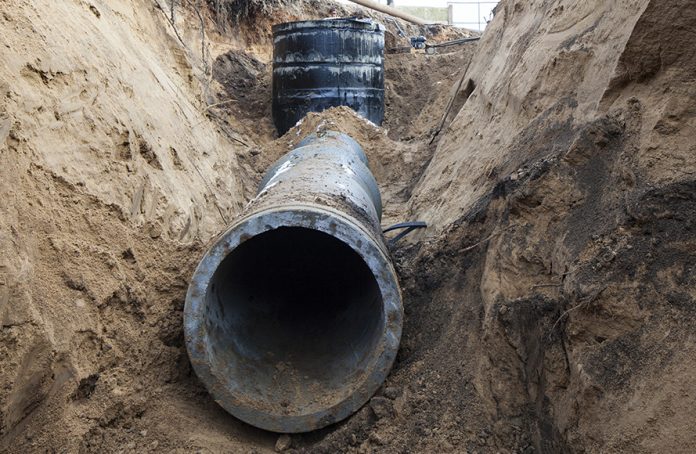 After the implementation of the transfer of private drainage to Wessex Water in 2011, it became imperative that we focus more attention on trenchless alternatives for repair of small diameter sewers. Our overall cumulative volume of public sewers doubled overnight from 17,000km to 34,000km, and the majority of that transferred stock was 150mm diameter.
Julian Britton I Eng MICE, Critical Sewers Manager, Wessex Water explains the process.

Wessex Water established their Critical Sewers Team in Sept 2004 at Kingston Seymour in Somerset, with the primary purposes of reducing the cost of sewer renovation interventions, using trenchless technologies where possible and mitigating the impact of our necessary works upon customers and commuters.

As a W&Sc we attract innovators who often wish to consult us and ask for advice at concept stage, where we are able to explain how products may, or may not, fit our modus operandi. We also benefit from fully developed solutions introduced by inventors or contractors etc, but that leaves an area where we recognise an internal need, for which there is no obvious and available solution. This was the case for the structural reformation of deformed sewers.

A greater understanding of CIPP

Wessex Water adopted the concept of renovating sewers by way of Cured in Place Pipelining (CIPP) in 1984, defined in the WRc Sewer Renovation Manual as a Type II lining, a British invention patented by Eric Wood, the founder of Insituform Technologies. Our early designs utilised the methodology of the SRM but, by 2005 we had adopted the American ASTM F1216 method of CIPP lining design, opting for the more conservative ‘Fully Deteriorated’ (FD) condition set out in the document.

In those early days at Kingston engineers followed the iterative and periodic development of F1216, but never lost sight of the caveat that polyester resin liners suffer time dependent creep under load. We recognised that special precautions should be applied for resultant thickness’ of liners beyond a host pipe deformation >10% of diameter.

Our calculations for the FD liners, which take into account the hydrostatic and geostatic loadings acting upon the pipe, as well as vehicular surcharge loads, proved that at around 20% deformation on diameter; the thickness of the liner doubles, dependent upon the ‘Declared’ mechanical properties of the liner composition.

That increase in liner thickness further reduces the hydraulic capacity of the host sewer in its deformed state, which is already compromised by the presenting pipe deformation. Consequently, if we were able to reform the sewer pipe to its original circularity, we would reduce the liner thickness required to hold the damaged pipe, therefore saving on resin and liner thickness, and the ability to restore our flow characteristics.

In 2012, colleagues in our Small Schemes Team were presented with a limited length of sewer with a 20% deformation in a 375mm diameter sewer in a ‘running’ sand geology, on the south coast of England. When excavating down, they found the original trench supports from the 1930s which obviously could not be removed at that time. Small Schemes had to chase the defect for 15m metres, costing some £200k. If we had had a device to re-round the sewer it would have been so much more cost affective and beneficial all round.

Development commenced on such a machine, a cut out of which is shown above. It represents a simple ram with linkage to transfer the hydraulic thrust of the piston, to five number metal ‘shoes’. The Re-Rounder (RR) was constructed to pass beneath any defect with a diameter deformation <23%. The rationale has been to use the laser on our in-house CCTV cameras to measure the freeboard available, and establish if the RR can pass beneath, the limiting diameter is that across the width of the wheel sets.

The device then operates and lifts itself into the centre of the pipe, and whilst the shoes seat in the invert section, the upper shoes push the pipe outward to reform the circularity of the pipe. The shoes have a cumulative force of 70 KN and this has been found capable of lifting all of the types of settled overburden encountered so far. Unless we are in a hydraulic sand, as mentioned above, we are likely to only lift the settled bedding/backfill material in the shape of a ‘church window’. This represents the ‘Pressure Arch Theory’ for compacted materials, which comes in to play, where the geology becomes self-supporting as it transfers its forces, allowing an arch to form.

The problem then becomes the instability of the host pipe as the RR is retracted. This is dealt with by deploying a ‘Stent’ made of stainless steel some 1.2mm thick, which remains in place until we can line over the defect with a full length liner (CIPP), or a spot repair (CIPR). The laser cut shells have a series of ‘V’ shaped ties between full metal strips, which expand as the shell is forced outward, becoming a shallower configuration. There is also a slight crimp in the solid metal strip sections, again a shallow ‘V’ shape, which ‘bites’ into the intrados surface of the host pipe. This provides additional anchorage for the stent should we wish to clean the sewers prior to lining. Flow in the sewer can continue at all times during installation.

A 50m section of sewer ranging from 1-3m deep in a narrow street, Abbey Row, Malmesbury presents a typical example of where major advantages can be identified. The length of sewer had SRM grade 5 and 4 defects, with four of the grade 5’s points exhibiting > 20% deformation, some at 3 m in depth.

The local Highways Dept of the Council could only allow us a weekend to renovate the sewer. The traditional options would have been to either:

Line the sewer over the major defects and accept the structural integrity of the liner would almost certainly have been compromised by the greater bending moments in the liner and the liner would have a reduced longevity;

Excavate down on the sewer to replace the four most defective sections, which would mean four teams working for two days and accepting a liner passage on the second day as they backfilled.

However, the RR was used to reconstruct the pipe as detailed above, with all four stents placed in 90 minutes, which allowed the CIPP lining to proceed, with a normal 3mm thick liner as opposed to 6mm required by an FD design and 20% deformation. The cost of the RR intervention represented a 95% saving over open cut costs for the four points under consideration.

This new innovation available to us reinforces our continued commitment to reduce our carbon foot print, which has been calculated as 95% less than conventional open cut. Over some 30Km of sewer renovation last year, we avoided 125,000 tonnes of excavated muck away to tip, and a corresponding volume of imported bedding, backfill and black top.

That equates to 250,000 tonnes of material transit avoided, and removed some 25,000 lorry movements from our customers streets, increasing safety for all.

The Re-Rounder has been awarded the following accolades since its launch within Wessex Water earlier this year: