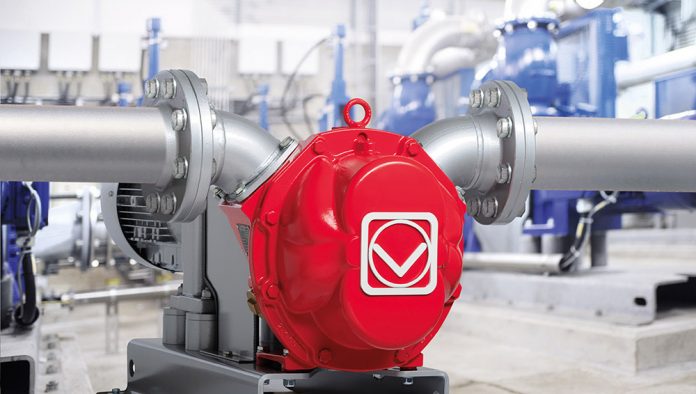 Anaerobic Digestion (AD) is a broad church when you consider that this type of technology is installed on anything from small farmyard AD plants with CHPs less than 150 kW right up to big food waste plants taking in over 50,000 tonnes per year.

On AD plants on sewage treatment works (without commingling) there are different challenges to suppliers such as Vogelsang, who offer pumps, macerators, twin shaft grinders and digester feed systems on all types of AD plants. Whilst there might not be the foreign bodies that a food waste AD plant would experience – such as metal cans, glass, plastics and meat bones – grit is a major issue as well as the presence of VFAs (Volatile Fatty Acids).

The waste water treatment sector has long looked for ways in which to remove grit from the process without real success … so the focus inevitably tends to be in dealing with it rather than removing it. To that end Vogelsang have a number of different elastomers that can be used in their rotary lobe or progressive cavity pumps that can minimise the wear rates and extend service intervals. Alternative materials as the metal liquid contact parts are also possible – and Vogelsang have had some success in particular with ADI (Austempered Ductile Iron) where the premium cost over standard grey cast iron is relatively modest. On a rotary lobe pump it is also possible to change the design of the housing segments – to use something called injection housing segments that can again increase service intervals.

Vogelsang have also dealt with issues – particularly on the HPH (Heating, Pasteurisation and Hydrolysis) section of enhanced digestion plants – where the VFAs in the media have caused elastomers such as NBR (Nitrile Butyl Rubber) to swell and go brittle causing loss of efficiency in the pump and worst case causing a catastrophic failure of the pump. It has been established that these issues can be addressed by using Viton (or Viton equivalents) as the elastomer.

On many sewage treatment plants you will also find twin shaft grinders or inline macerators that are used to protect downstream located pumps.

Vogelsang’s XRipper – their innovative take on a twin shaft grinder – which uses monolithic ripper blocks offers far more rigidity over the previously used concept of separate knives and spacers. Their design also allows the units to be serviced on site – as opposed to having to return the unit to the manufacturer (which would necessitate either having a spare unit or running without protection for the pumps).

Vogelsang’s RotaCut inline macerator is acknowledged as being market leader of its type. The key features are the automatic take up of metal wear using its Automatic Cut Control (ACC) system and the RotaCut control strip that ensures that the rotor is periodically automatically reversed to ensure sharp edges on both the knives and the screen. (The strip also ensures that items that are difficult to cut are effectively dealt with by rocking the rotor holding the knives backwards and forwards).

Vogelsang also offer a system known as BioCrack – an electro-kinetic disintegration system that increases gas yield rates – that lowers the parasitic load associated with in tank mixing systems (because it reduces the viscosity of the media) and will reduce the total amount of sludge generated by biosolids plant. The system is usually installed on digester loop, using a pump and RotaCut macerator. It creates a minimal parasitic load – less than 35 W per probe with a maximum of 6 probes on any one unit.