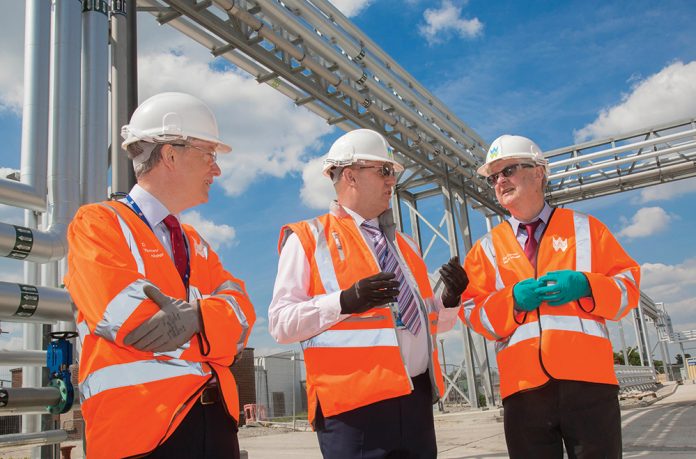 The only not-for-profit water company in England and Wales has cuts its carbon emissions by nearly 80% in the last decade, it has been announced.

Dwr Cymru Welsh Water confirmed it had reached the milestone as First Minister Mark Drakeford visited its pioneering Five Fords Energy Park project in Wrexham to learn about the array of green energy projects on the site.

The company announced its operational emissions had been cut by 79% since 2010-2011, which is the result of investment in renewable energy generation and energy-efficiency technologies at its sites – as well as buying all our electricity from renewable sources.

Welsh Water will generate around 25% of the energy it needs through renewable generation by next year – including hydro turbines, wind power, solar and gas-to-grid. The remaining 75% is made up of 100% green electricity.

It comes after the company published its long-term plan, Welsh Water 2050, last year, setting out how it would tackle big challenges facing society, including work to tackle climate change, population growth, the growth of the digital economy, and rising customer expectations.

The plans are closely aligned with the Welsh Government’s Well-being of Future Generations Act, and set out how the company ensure sustainability of its services while keeping bills affordable.

Five Fords – which has undertaken a £36 million investment to turn it into a model green energy site – processes sewage of around 180,000 customers in north Wales, and includes 10,000 solar panels on site which generates a total of 2.5GWh of energy – enough to power 700 homes.

The First Minister was given a tour of the site by Welsh Water Chief Executive, Chris Jones, and shown the construction of its under-construction advanced anaerobic digestion (AAD) facility – which will convert sludge, the material left after sewage treatment, into green energy.

The work at Five Fords is part of a record capital investment in this financial year totalling more than £450 million – and the company is on target to invest more than £1.7 billion in the five years to 2020.

First Minister Mark Drakeford said: “I was very pleased to have the opportunity to visit Five Fords Energy Park, and to see the result of the developments which have taken place here making it a pioneer of green energy.

“Investment in sustainable water infrastructure supports the safety of communities, which lies at the heart of our Well-being of Future Generations Act.

“I’d also like to congratulate Welsh Water on cutting its carbon emissions by nearly 80 per cent in the last decade. This is a great achievement.”

Welsh Water Chief Executive Chris Jones said: “We’re pleased to welcome the First Minister to Five Fords to see the work being done to increase our green energy generation and continue our progress in reducing our own carbon footprint.

“In Welsh Water 2050 – our long term vision for the company – we outlined our plans to tackle some of the biggest challenges we face and climate change is one of the most serious. As part of this, we are striving to reduce our own impact on the climate, while also strengthening the resilience of our networks to deal with the increasing threat of adverse weather – like extreme cold snaps, flooding and prolonged drought conditions – that can impact our network and the services we provide our customers.

“We have worked closely with Welsh Government to set out how we will build on this encouraging progress and we’re delighted the First Minister was able to see the fruits of that cooperation first-hand.”