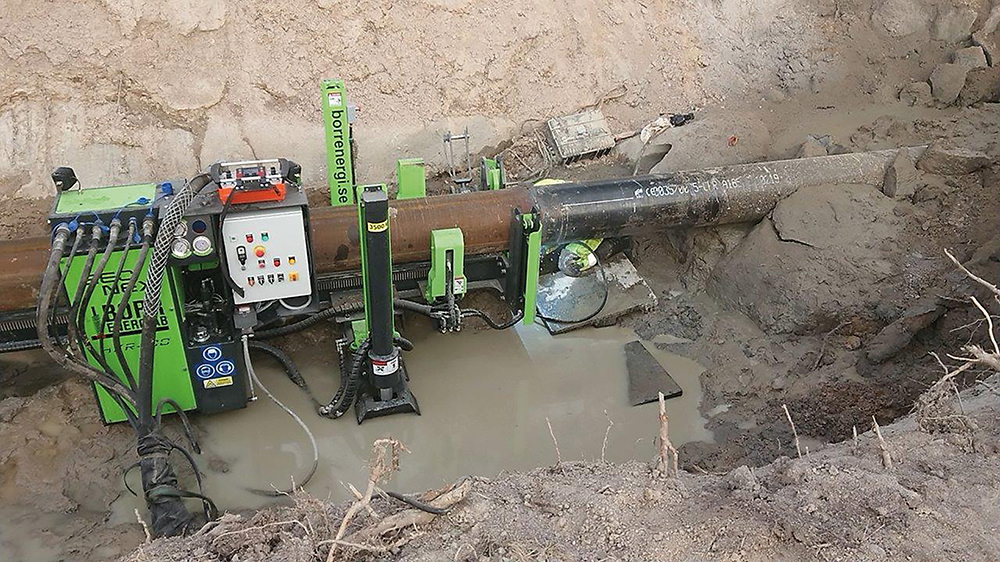 Geonex hammer drilling is a trenchless method which provides clear benefits for the water industry, producing a guaranteed slope, no matter what the geological conditions you come across.

The slope is guaranteed even if you encounter boulders, hard bedrock, soft soil or any combination of the above.

Drilling is even easier than with unguided auger boring. Geonex hammer drilling doesn’t require a thrust wall and accuracy can be achieved simply by aiming, there is no need for laser guides or measuring systems, as the drill remains straight and on course.

Looking at the concept, it’s easy to understand why, for the drilling process is turned around, instead of pushing from behind; the pipes are pulled from the front by a powerful hammer. Consequently, the hole is completed with a single pass, as the pipe is pulled. Pushing the rope and expecting it to stay on target is impossible without steering, but pull and it has no option but to keep on a straight course. It’s as simple as that.

Due to the accuracy and straightness, less friction is produced, allowing the pipe to reach 100m lengths without getting stuck. Whilst the small overcut inherent in the process, means there are no bumps made in nearby roads or rails as no hollows are produced. As the pipe is pulled by the integrated drill-head, no ground pressure deformations are produced by the force of excessive pushing.

Benefits for the water industry include the reduction in disruption caused to roads, rails and other nearby infrastructure, allowing for shallow installation depths and no need for excessive cover as with horizontal directional drilling (HDD). A minor overcut of a few mm’s is all that’s required to facilitate the process and guarantee the slope, meaning it’s almost impossible for it to rise up and cause deformations.

Experience has shown that there is either no deviation or the drilling has dropped slightly in the drilling direction. No drilling fluids are required to reduce the friction or support the hole. The steel casing can be pulled through the ground simply by the vibration provided by the hammering, and the steel casing supports the hole as it’s drilled.

This clean drilling is a clear benefit for sensitive locations and projects, an example of which is the horizontal groundwater well drilled in Bex, Switzerland. As the aim of the project was to collect alpine water for bottling and sale, the use of bentonite or drilling fluids was prohibited, as any foreign material would be seen as a contaminant.

As hammer drilling only requires air, it was ideal for the purpose. The impact of the small amount of hammer oil needed for lubrication was tested in this project. The oil was found to remain in the drill cuttings, so the soil was kept completely clean as the cuttings were collected.

For contractors, the hammer drilling is the perfect choice as the same tools can be used in all geological conditions. Although each diameter needs its own tools, when used properly in typical mixed soil conditions, they are economical.

Drilling hard rock frequently proves expensive, but even here the project costs remain interesting. When compared to microtunnelling, which also uses a full face drill head, the costs are competitive, especially when you consider that with microtunnelling you may still get stuck or go off course due to the geological conditions encountered.

Hammer drilling remains a particularly competitive solution for short (<60-80m) crossings with diameters of 140 to 1220. Typically remaining the best solution in casing sizes 324, 406, 508, 610 and 813, easily competing against pipe ramming, when total project costs and risks are considered. Geonex hammer drilling easily enables 100m tunnels to be successfully drilled and now after careful analysis, 150m drillings have been completed,

Overall, Geonex hammer drilling enables straighter more accurate drilling to be completed, at competitive prices, with less disruption to the nearby infrastructure and less of an impact on the environment.

Find out more on the Geonex YouTube channel or visit geonex.fi