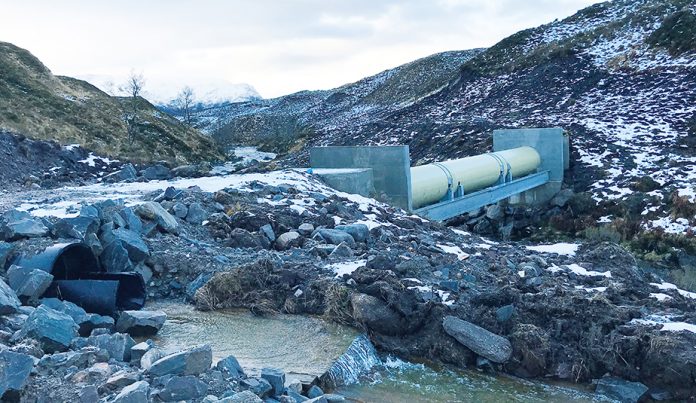 A hydro-electric water pipe that carries water from a river to a power generator has been sealed at multiple points using the no-dig VIP-Weco pipe rehabilitation system.

Joints at eight locations along the 1.5-kilometer pipe near Inverness in the Scottish Highlands had not been water tight to the pressure standard demanded for the 1.35MW power project.

Global seal and gasket manufacturer VIP-Polymers Ltd was commissioned to supply its VIP-Weco internal seals to repair the leaks without the need for time-consuming and costly excavation.

VIP Business Development Manager Jim Shaw said: “Our VIP-Weco seals achieved the desired results with complete success, and with minimum disruption to the operation of the hydro power scheme.

“The defective joints were located along a 100 metre stretch of the pipe, which began 80 metres from the entry point. The partners involved in the hydro project urgently wanted a solution that was quick and cost effective to deploy, and they certainly got that with VIP-Weco.”

VIP-Weco seals are used worldwide for trenchless rehabilitation of pipes for water, fuel, and gas. They use WRAS-approved material, comply fully with BS6920, and have a typical life expectancy of 50+ years.

Rubber sleeves made from EPDM or NBR compounds are applied to the inner wall of the pipe, then held in place by stainless steel retaining bands to create a safe, durable and low-cost mechanical sealing solution.

The hydro-electric pipe, which was designed to have a working pressure of 1.5 bar, was found to be unable to hold its hydrostatic test pressure of 12 bar at the eight joints.

A final seal was installed where the pipe stepped down from 1600 to 1400 millimetres, with a section of 1600mm ductile iron between the two. A bespoke seal was manufactured, with an extra retention band, to accommodate the 200mm variance in pipe diameters.

Minimising downtime was essential to the success of the pipe rehabilitation project. The metal retaining bands for each seal were supplied in two sections, making them easier to transport into and along the pipe.

VIP, based in Huntingdon, Cambridgeshire, was commissioned to supply the seals by Fusion Pipe Products. The installation was carried out by authorised VIP-Weco installers.

Commenting on the project the installers said: “The joint failures had been caused by settlement of the six-metre pipe sections within the trench infill, which resulted in pipe deformation.

“The flexibility of the VIP-Weco system could accommodate this deformation and still achieve the desired pressure standard with ease.

“The VIP-Weco design, based on split retaining bands, allowed us to quickly traverse the pipe and install the seals, keeping operational downtime to a minimum.”

Seven of the VIP-Weco seals selected for the pipe rehabilitation project were 280 millimetres wide. The reducer seal was 480mm wide, to accommodate the difference in pipe diameter.

These wider seals can be supplied with other configurations, for example to accommodate extreme longitudinal cracking.

Both widths can be used on circular, elliptical, and egg-shaped profiles. The quantity of retention bands supplied is dependent on the infiltration pressure rating requirement, ensuring the most cost-effective solution for each project. 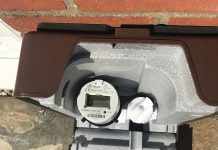 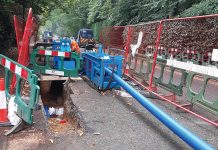 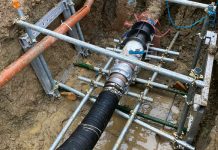